The IITA Cassava and Maize Breeding Units in Nigeria have developed multiple cassava and maize genotypes with improved yields, starch content, resistance/tolerance to major pests and diseases, and other characteristics that will satisfy industry requirements, such as improved nutritional content (e.g., higher provitamin A content).

The deployment of these newly developed varieties into Cameroon required a basic understanding of their performance in relation to contrasting environments. These selected varieties were then disseminated through development projects like the Agricultural Investment and Market Development Project (PIDMA). 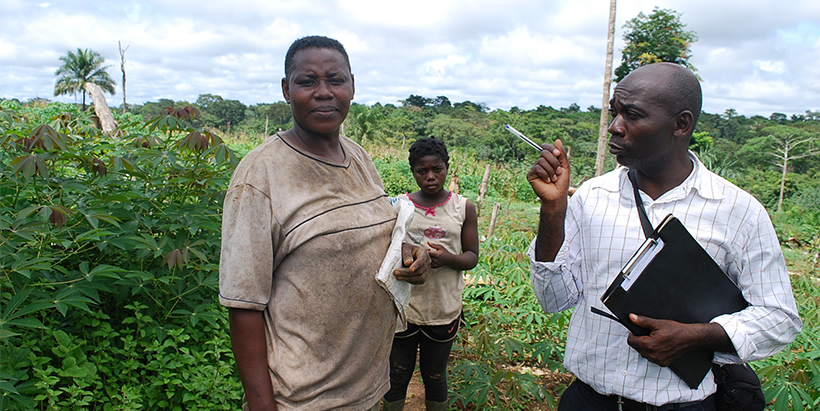 Maize selection by women in the Far North region

PIDMA is a joint operation of the World Bank and the Cameroonian government to transform the low productivity and subsistence-oriented cassava, maize, and sorghum subsector into commercially oriented and competitive value chains that are inclusive of smallholder farmers, sustainable and resilient to climate change, and create rural employment. Another objective is to improve access of beneficiary farmer groups (including women and youth) to value chain finance and quality food.

IITA and PIDMA signed a partnership agreement to ensure that gender-equitable benefits reach smallholder farmers by providing cooperatives with technologies for sustainable production, such as improved pre-foundation and foundation cassava seedlings and maize (including biofortified varieties) with the following characteristics: high yielding, disease resistant, and adapted to targeted production zones.

The project addresses the challenges related to low productivity of cassava and maize landraces, vitamin A deficiency, yield loss caused by emerging pests and diseases, and low soil fertility. PIDMA is implementing it in collaboration with the Institute of Agricultural Research for Development-Cameroon and the Ministry of Agriculture and Rural Development. 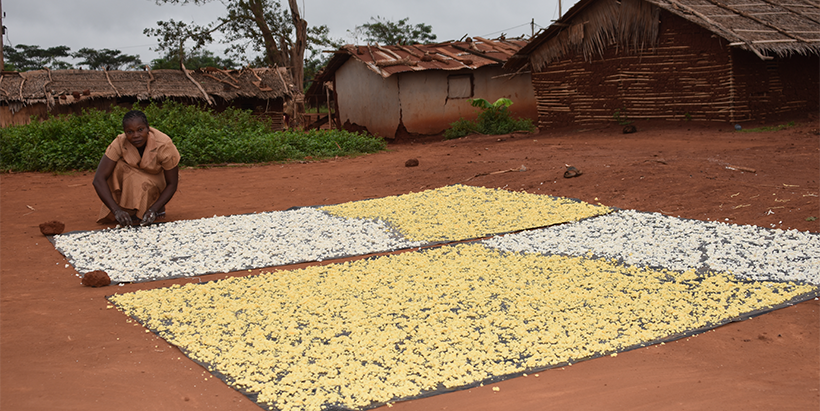 Woman drying yellow cassava for fufu in the East region.

Successes recorded include introduction of 27 cassava and 13 maize genotypes from IITA-Ibadan, which were evaluated in multilocation trials conducted with IRAD.

From the trials, the project selected nine cassava genotypes that had an average fresh root yield between 25 and 30 t/ha in four agroecologies, and two maize genotypes yielding between 2.5 and 3.5 t/ha in two agroecologies. Average fresh cassava root yield for 17 improved varieties over two cropping seasons was 26.9 t/ha against 16.65 t/ha for the best local variety.

In 2018, some 4,395,000 cassava cuttings and 8 tons of improved maize seeds of selected genotypes (including biofortified varieties) were delivered to 37 farmer groups. The cumulative number of improved cassava cuttings supplied by IITA for subsequent multiplication into certified seeds is estimated at 8,525,000. Cassava yields in PIDMA cooperatives increased from 8 t/ha in 2014 (baseline study) to 23.51 t/ha, against an expected project target value of 20 t/ha, while maize yield increased from 1.5  to 3.8 t/ha against an expected target value of 4 t/ha.

On the nutrition component, biofortified cassava genotypes were selected for having mean total carotenoid content in fresh yellow cassava roots reaching 10.96 µg/g with genotype I070593. In collaboration with CIRAD, processing this yellow cassava into local cassava-based food (“fufu”) was successfully conducted in the East region where vitamin A deficiency is among the country’s highest.

Field surveys and trials were carried out to backstop the project. Results included: (1) Various strains of the Cassava Mosaic Virus mapped in various cassava production basin and cooperative farms, with a lower incidence recorded on improved varieties (9%) compared to local varieties (79%); (2) None of the samples collected tested positive for Cassava Brown Streak Disease; (3) Distribution of fall armyworm was mapped in the country with the identification of strains and host plants; (4) Five booklets and five brochures on sustainable cassava and maize production and integrated pest management were distributed to cooperatives.

Further research could be conducted on the Provitamin A (PVA) cassava introduced in rural communities to (1) evaluate the effect of cassava pests and diseases on PVA content, (2) assess the impact of processing technologies on PVA retention, and (3) understand the drivers of adoption of PVA cassava among farming households.