The former President of Liberia, Ellen Johnson Sirleaf, entrusted IITA with a project to build six processing factories in Liberia within two months. It was the end of her tenure and the close of the financial year, but Mrs Sirleaf wanted the factories built and commissioned before her retirement, as it was her brainchild.

IITA successfully installed five of the factories within the stipulated time but could not build the 6th as the location was inaccessible due to bad roads during the rainy season. However, the factory was eventually completed and Mrs Sirleaf commissioned one while declaring all the factories open. According to Michael Edet, Liberia Country Representative and Cassava Extension Agronomist, “All six factories are functioning, although not to the full capacity of 20 tons of fresh cassava roots per day.” Thus, Liberia becomes the only country in Africa with six of these factories running smoothly. However, the Country Representative has initiated discussions with the Food and Agricultural Organization (FAO) and World Food Programme (WFP) and soon with the United Nations Development Programme (UNDP) in Liberia for further collaborative projects to bridge the gap.

Cassava and beans flour processed in the factory

SAPEC was launched by the Liberian government to help farmers gain access to increased productivity through agricultural training and commercializing agriculture in Liberia. Through SAPEC, IITA has introduced high-yield, disease- and pest-resistant cassava varieties to Liberia. IITA also trained farmers on the processing of cassava roots to produce High Quality Cassava Flour (HQCF) for confectionery and odorless fufu and improved existing methods of garri and starch.

Increased productivity was necessary to meet growing demand due to cassava being the second staple food and business product coupled with the involvement of the cassava hubs in school feeding programs in collaboration with the government and WFP as well as recent export-driven initiatives. Consequently, an out-growers scheme has been crafted within a 10-km radius around the cassava hubs as a sustainable approach to feed the factories.

Farmers have been trained to plant cassava all year round, with 300 farmers per hub planting a minimum of 2 hectares of cassava. Right now, the hubs are exporting cassava products such as chips, odorless fufu, and HQCF to China and Australia. IITA

also played a major role in linking the factories to markets and service providers for the maintenance of the factories.

According to the project schedule, IITA Engineers are preparing to move to Liberia for the final round of backstopping of the cassava hubs.

Impressed with the result of the first phase of the project, the Minister of Agriculture, Jeanine Cooper, has approved the second phase to commence in June 2020. The second phase will leverage on the factories and IITA cassava technologies established, with plans instore for the youth and physically challenged to be actively involved in agribusiness. 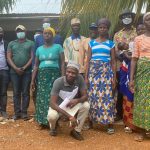