Farmers recount the benefits of AKILIMO in cassava production

The outgrower farmers of Psaltry International Limited (PIL) have started experiencing the positive impact of the AKILIMO tools from the African Cassava Agronomy Initiative (ACAI). Multiple success stories have emerged in relation to the use of the tools.

Farmers from Ado Awaye in Iseyin Local Government of Oyo State under the outgrower scheme of Psaltry recounted stories about drastically improved cassava production due to applying the recommendations gotten from AKILIMO on their farms. The farmers were delighted because this translated to an increase in their cassava yields, an experience that they have not previously had. 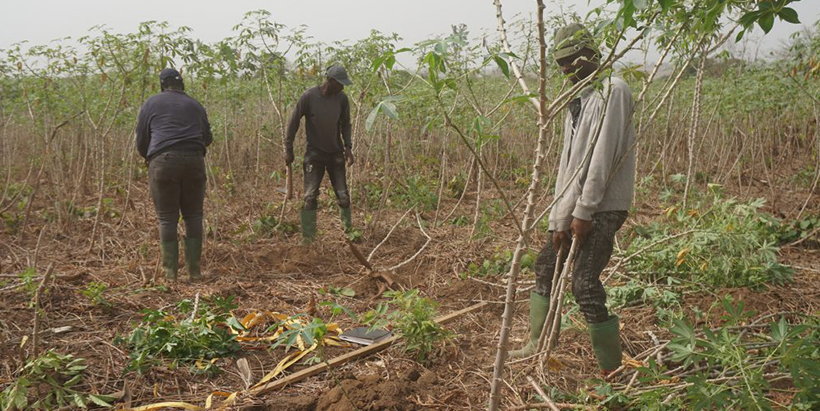 AKILIMO offers a suite of Decision Support tools and materials for cassava growers, extension workers, and organizations that promote improved cassava cultivation practices. These tools have been developed by evaluating agronomic technologies in the fields of over 5,000 cassava growers in Nigeria and Tanzania.

In a bilateral meeting with PIL, facilitated by ACAI Scaling Specialist Thompson Ogunsanmi and ACAI Monitoring, Evaluation and Learning Officer Adekunbi Saburi, the farmers confirmed they used AKILIMO Fertilizer Recommendation (FR) and Scheduled Planting and High Starch (SP-HS) tools in their fields. According to one of the farmers, Ogunniyi Oluwagbenga, AKILIMO is a modern technology that has helped farmers end their continuous toiling without a commensurate improvement in yields.

Another farmer Olugbile Adelani noted that his farmland, which previously yielded 6 t of cassava, has now produced 12 t per acre. This was after he had applied the six steps of the FR tool and considering other agronomic practices.

One farmer also recounted his joy about the newly found knowledge of determining the exact land area. This has ended recurrent arguments between farmers and their workers, and it has helped them reduce the cost of plowing and ridging of farmlands.